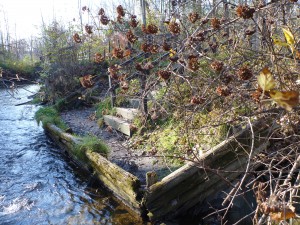 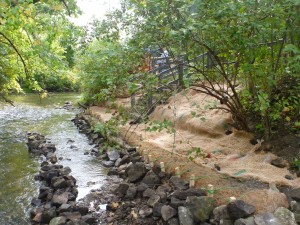 Phase I of this project (the Dutton Road site) began in September of 2012.  Repair of this site consisted of removing a degraded river viewing structure and placing coir logs along the streambank to provide stabilization for vegetation to take root.  The coir logs (rolled coconut mats) were placed at the stream edge and slightly up the bank to create a tiered effect.  Once the coir logs were set in place the eroded areas were filled and seeded with a native rye grass.  To finish the project and hold down the seed a section of biodegradable coconut mat was set in place.  The rye grass would eventually grow through the mats and provide excellent root structure to prohibit future erosion.

In late October CVTU volunteers re-visited the site to intall live stakes which will eventually grow and produce a solid root structure to hold the soil in place during high water events. 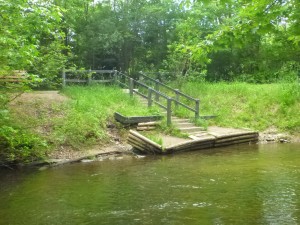 Phase II of this project (the Dinosaur Hill site) began on Saturday, August 17th, 2013.  Nineteen volunteers from the Clinton Valley Chapter, the Vanguard Chapter and the Clinton River Watershed Council spent the morning working hard to re-establish an angler access area that was originally constructed over twenty years ago.  This project was funded through the TU National Embrace-A-Stream grant and a grant obtained from the Michigan Fly Fishing Club. 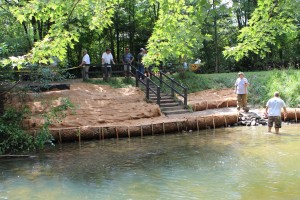 During the work day volunteers removed the old angler access structure and then placed coir logs (rolled coconut mats) along the stream edge.  The area behind the coir logs was then back-filled and seeded with a mixture of native rye and wildflowers.  To allow for a stream-friendly angler access a layer of crushed limestone was laid down in an area that receives less pressure from normal stream flow.

To make the site even more visually pleasing, a flower box was installed directly in front of an existing park bench which overlooks the creek.  Even after the planted seed takes root and a few deep-rooting native shrubs are put into place this will be an outstanding area for Paint Creek Trail users to enjoy the beauty of Paint Creek.

The Clinton Valley Chapter would like to thank all of the volunteers that have made these two projects possible.  Without their dedication to our “gem” that is Paint Creek this type of work would never be possible.